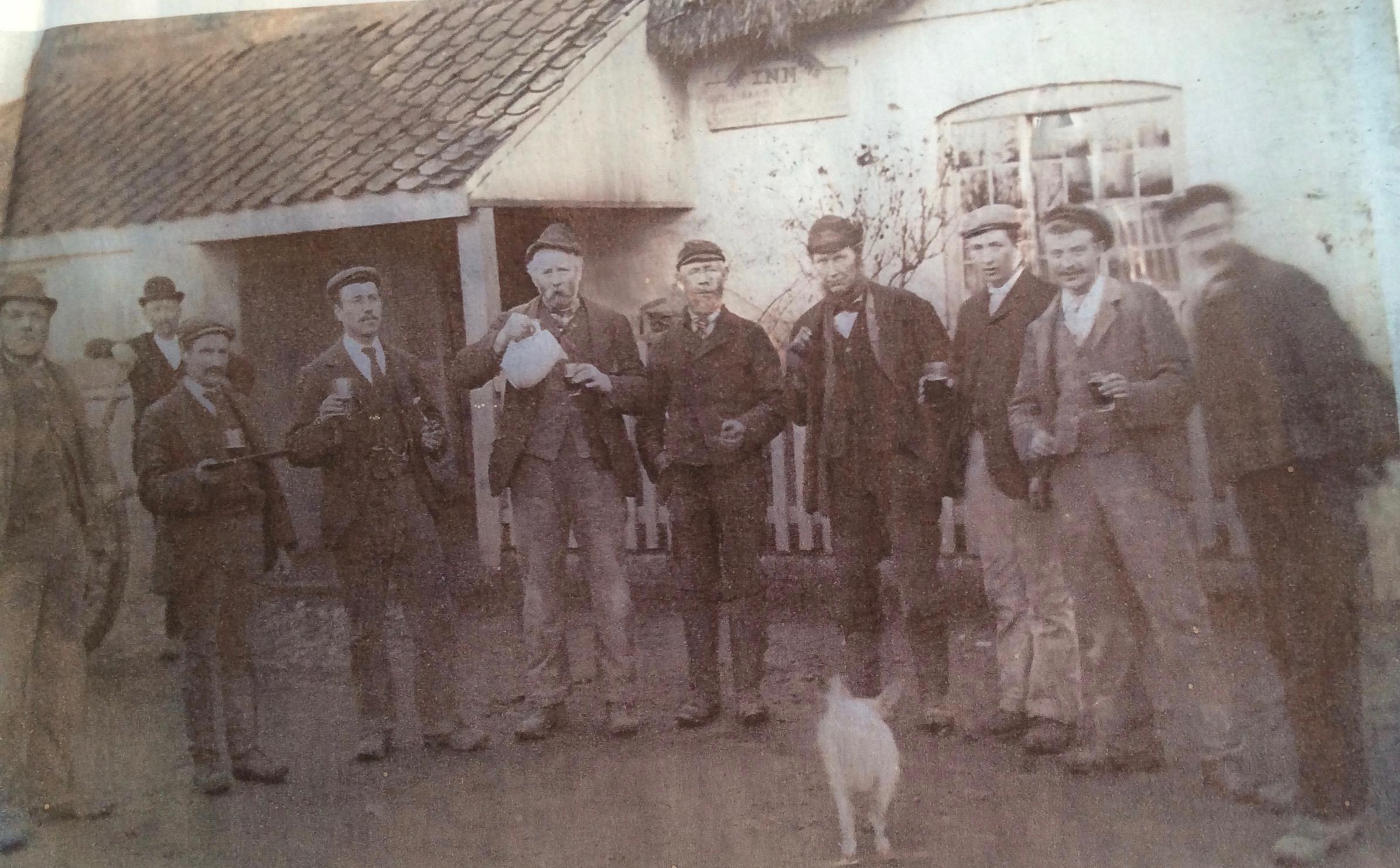 Around that time Ancaster Estates sold off Kirkby Underwood as a complete lot, from then on it has been split up into smaller parcels.

My grandparents moved here around about 1928. They set up the land as a small holding with poultry, pigs and fruit trees. They had breeding sows and kept some of the pigs to fatten to bacon stage which were then collected by a local transport firm and sold to Walls.

Grandad was a brick layer and Grandma a house wife. Tom, (Tommy) my father, was their only child. Tommy was born in Folkingham and also lived in Yorkshire. He was a butcher’s apprentice at Skegness then a butcher at Dunsby. It was his uncle’s business and he took it over for a few years in the 1950’s. I remember him going to the Game Keeper at Kennel Cottages (this was during the early 1950’s when we still had rationing) to collect pheasants and rabbits which he then took to Peterborough to exchange for cooked ham and meats to sell to local customers. He had a maroon Commer Van and in those days the trades’ people came to the village with their wares. Dad used to clear out the back of this van at weekends and take us to Frampton near Boston to see my mother’s parents. We could also get Cresswells bus to Boston on a Wednesday and Saturday from Rippingale Cross Road. It took you back to Aslackby then to Rippingale, Billingborough, Sempringham and then on to Boston.

Going back to Kennel Cottages they are next to Callans Lane Wood and when the trees were felled in there about the 1930’s they were taken out by horse and “drug” (2 wheels front, 2 wheels back) and taken through the village to Rippingale Railway Station.

Licence to Kill Game which cost £3 quite a lot of money in those days. Dad had a licence to kill pigs as well

The copy of the green book “Sick & Dividing Club” was his membership book run by “The Three Tuns”. Dad went to the pub on a Monday night to pay his subs and had a pint at the same time. This was a club you paid into in case you lost your job.

The pub closed in the 1960’s. There was no bar, you went into a passage with low beams and the Landlord got the beer from the cellar out the back which was down a few steps.

Mr. Walton was the Landlord. The carpenter, Billy Green, bought the pub about 1969 when the brewery closed it. When the thatch was burnt it was replaced with tiles.

I was born in the Brick Yard Cottage as my mother lived with Grandma as dad was away at war. We had four wells, a tap on the roadside and then a tap and sink in the yard. The outbuildings had a coal fired copper which heated the rain water that was collected in the

The outside toilet was wooden with a bucket. A lorry came once a week to empty it, a tanker I think. The driver was the football team’s goal keeper at one time.

In the dairy we stored the eggs, it was cool, and these were collected and sold once a week. Inside the dairy was the meat safe. This was a wooden cupboard, free standing,

with a fine wire mesh door.

In the early 1950’s the electric supply was put on to the house but you had to hire your own electrician to fit the lights and we had one 5 amp socket for the whole house and no inside toilet.

My family lived in the bungalow next to where Don Taylor lived (Mally, Nigel and later Richard but I spent my time with my grandma.

The village football field was “Home Field” next to Woods’ farmhouse. The cows were moved off and then we played. Gordon and Keith played for the team. It was part of village life watching the game on a Saturday afternoon and we were in the Bourne League. A Mr. Ling organised the football team and before that a man who was a permanent lodger at the pub.

I can remember potato picking for Mr. Barnard at Bulby Top. They were lifted by a spinner pulled behind a horse I think. Then picked by hand and put into a cart pulled by a horse and taken to a grave at the end of the field. A lorry used to take the women to and from

Nora came to the bungalow next door in 1950. Before that the land where Nora’s

bungalow is had haystacks on it. Before this time all of Aslackby Road was grassland.

Pot Ash Farm was a dairy farm and the farmhouse was built about 1950, the same time as

Nora’s bungalow. I believe Pot Ash Farm was the first to have an automatic milking

Our school teacher was a Mrs. Scrimshaw, a widow, and she came from Billingborough,

haircuts in his old pig-sty on a Sunday morning. He used hand clippers and did the men

and boys, he also mended shoes.

railway to the brick yards at Kirkby Underwood. Also going back in time the King George

the farmers paid for the grazing at the village pub. Also there was a sheep dip in Temple

Wood which is now used for bats (you can still see the dip). On the other side of Temple

Wood were pre fab dwellings on the air field where families lived until the 1950’s. During

the war the edge of the airfield had no trees and there were aircraft workshops there. You

can still see the bases. This air base was used for towing gliders for the Parachute

chicken shed. Grandmother had one evacuee and Mrs. Christian one as well. In the early

1950’s they visited, cycled from Hull with tents, and camped in our paddock, I remember it

because the geese got into the tents! One evacuee brought his wife back to meet my

grandmother and many years later after I was married the couple came back again.

At the time of the Silver Jubilee I remember a party in one of Nelson’s sheds.

The cottages which were opposite the village hall used to step straight out onto the road.

There were 4, probably 2 up 2 down, with large gardens out the back. A local builder who

lived next doors to Louths bought the plot and built the house where Mrs. Parsons lives

now. Her garage was the original Village Hall.

I left the village for about 8 years and lived and worked in Peterborough, coming home at

In total the Brick Pits site is 3 ó to 4 acres in size. You look out over a beautiful nature

reserve but hidden under the mounds and trees is evidence of a busy working brick yard.